Going beyond translation, localization can make or break marketing campaigns. The process of adapting a product or content to a specific country or target market, localization requires a deep understanding and comprehensive study of the culture. Some brands make the mistake of simply translating their slogans, product names, and other content, potentially blowing their marketing budgets or turning into a laughingstock.

Here’s eight of the best (or worst) localization blunders that have gone down in history.

Way back in the 1960s and early ’70s, Pepsi launched an international campaign with the slogan, “Come alive! You’re in the Pepsi Generation!” It was a big success in the Western world, but unfortunately, when they tried to localize it in China, the line was mistranslated to Mandarin and Cantonese as, “Pepsi brings your ancestors back from the dead!” and “Rise from the grave with Pepsi!” in German. Yikes! (Maybe it would’ve worked for Halloween?). Not all translation blunders originate from the U.S. Swedish vacuum maker Electrolux learned its lesson when it introduced its products in the U.S in the 1960’s. Hoping to  highlight its vacuum’s main benefit and unique selling point, the Scandinavian company’s ad campaign centered on the tagline “Nothing sucks like an Electrolux.” This probably confused many U.S. shoppers as well as those who know American slang, who would’ve understood the line very differently.

This well-known fast-food chain have used the timeless slogan “Finger lickin’ good” since 1956. But when KFC expanded their franchises into China in the late 1980s, the translation became “Eat your fingers off”. (Ouch!). Luckily, the mistranslation didn’t hurt the brand’s success in the long run as KFC remains the number one fast food chain in China today.

Another campaign that made it big in the U.S. is the “Got milk?” campaign featuring celebrities with milk mustaches. The brand would have gotten into trouble in Mexico if the big blunder wasn’t caught in the market research stage.  It wouldn’t have worked in Mexico for two reasons, anyway. First, the the slogan was translated as “Are you lactating?”. Second, the idea of a household running out of milk is offensive and not funny for mothers and grandmothers, who comprise the milk buyers in Latino households. Asian brands also experience cross-cultural blunders when launching campaigns in distant markets. In 2001, Japanese car manufacturer Honda decided to keep the name “Fitta” when they introduced the compact car in Sweden. To the management’s surprise and embarrassment, they learned that “fitta” was an old word used in vulgar language to refer to a woman’s genitals in Swedish, Norwegian and Danish. That’s why they chose to call it the Honda Jazz in Europe but modified the original name slightly to Honda Fit for the U.S. market.

After taking a U.S.-based campaign overseas, the HSBC bank had to rebrand its entire global private banking operations in 2009. The global bank spent millions of dollars to scrap its five-year-old “Assume Nothing” campaign when problems arose abroad. The tagline was translated in many countries as “Do Nothing” and the bank spent $10 million to change it to the current “The world’s private bank,” which has a much simpler translation. In 1996, a time when the computer mouse was still considered a novelty, Matsushita and Panasonic intended to launch in Japan a touchscreen computer with an Internet browser. They were going to name this computer after a popular cartoon character, Woody Woodpecker. The campaign was put on hold when an American employee realized the translation of the ad was “Touch Woody—The Internet Pecker.” In American slang, this is rather vulgar.

It was too late to change the product name to “Woody”, but Panasonic executives decided to modify “Touch Woody” to “Woody Touch Screen” in the launch materials instead.

To localize marketing content successfully, it’s crucial to understand the cultural norms of a foreign market prior to translation, one of the elements of the localization process. Crafting a working translation and localization strategy may also boost your revenue, traffic and conversion rates.

Find out how Gengo can help your business expand into overseas markets with a community of experienced translators worldwide, who are knowledgeable in specific industries. 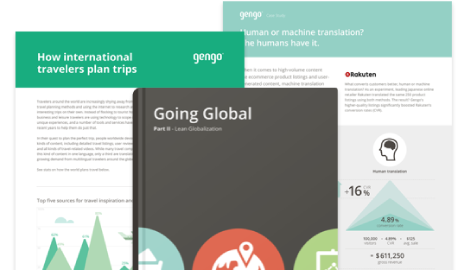