To say that author and award-winning translator David Bellos knows a thing or two about translation would be an understatement. With over 40 years of experience, he has achieved international recognition for his works as a translator and biographer and has an impressive list of acclaimed publications to his name, including his most recently published book, Is that a Fish in Your Ear? Translation and the Meaning of Everything.

In his new book, Bellos debunks many of the myths and misconceptions about what translators do (and don’t do), and what translation is (and isn’t), as he takes readers on an adventure—one that travels back in time, around the word and deep into the origins and complex oddities of language. Leaving industry-specific jargon behind, he offers non-linguistically savvy readers a glimpse into a world that might otherwise remain unknown to them. Of course, that’s not to say he doesn’t also leave a few tricks up his sleeve to surprise even the most seasoned of translators.

We recently had the honor of interviewing Mr. Bellos about his experience as a translator, his insights on the translation industry and his new book. Here is what he had to say.

What impact can we expect technological advancements like smarter machine translation to have on the future of the translation industry?

What is the likelihood that machine translators will ever be able to produce coherent translations of texts between obscure language pairs like Urdu to Zulu, for example?

For direct translation—no chance at all. But by using a pivot or relay language (which is almost always English) machines can already simulate translation from Yiddish into Vietnamese. I suspect the output is not very convincing in Hanoi. However, since there are almost 49 million translation directions between all the languages in the world and there is never going to be a 49-million-fold community of translators, machines might well be a useful adjunct to actual translation for many of the underserved directions that exist.

You write in your book how it is difficult to justify that poetry can ever be “lost in translation.” Why do you think readers are often quick to assume that finding an adequate translation is impossible?

Most people don’t even think how hard it is to translate even the simplest expression. They have no idea—and don’t want to have any idea — how much knowledge and skill is required to translate texts they prefer to think of as straightforward. But since they also find poetry difficult, poetry comes to mind as an easy example of what must be hard if not impossible to translate. That allows the kind of false generalization that I do my best to undermine in my book—that poetry is always lost in translation.

In your book you discuss the historical rise and fall of vehicular languages used in the scientific world. In your opinion, will Chinese ever become a global lingua franca?

To be honest, I have no idea. I have no privileged access to the future course of world events! What history seems to teach us is that anything can happen. But as the advertisements for stockbrokers always say, the past is no guide to the future. So all I can say with any confidence is that there are no strictly linguistic reasons for any language in the world not to serve at some point as a vehicular language. Two factors—population size and rate of economic growth—currently seem to point towards a larger world role for Chinese. But these are not the factors that made Greek, Latin or Syriac important global languages.  In the case of Chinese, all sorts of as-yet unimagined factors may intervene. We shall have to wait and see. 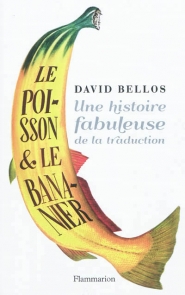 Can we look forward to seeing any published translations of your new book, Is That a Fish in Your Ear?

Yes. The French edition came out on January 25, 2012, under the title Le Poisson et le bananier. L’histoire fabuleuse de la traduction (Flammarion). I have had tremendous fun working with a brilliant translator, Daniel Loayza, to transform the book into something that we hope is as interesting for French readers as the English seems to be for you! Translation rights have also been sold in Spain, Greece and Korea.

When translating literature do you read the book beforehand? Do you have conversations with the author and if yes, what do you talk about?

Yes, I always read the book before I decide whether I would like to translate it. I would hate to start translating a book and to discover after a couple of chapters that I didn’t think much of it. But I am in a privileged situation—I have another job and don’t depend on translating to live. I translate books I like.

I do talk to the authors I translate—when they are alive. The topics vary depending on the nature of the book. Often it has to do with the handling of names of places and people; sometimes with my guesses about the significance of particular forms of speech used by characters, or the register of idioms used; occasionally, I ask for more background information on allusions that I find obscure. A few times, I find what in the movies are called “continuity errors” and need to check them out. There are some instances where the original gets modified as a result of the particular kind of reading that a translator does.

In your experience as a translator, how have you seen industry standards, techniques and common practices evolve over the years?

I have only ever really translated books for publishers, so I have no experience of the standards and practices of the industry as a whole. In my small part of the field I am aware of a small but steady increase in the respect and attention paid to translators. Of course, that may be just an optical illusion created by the fact of my now long service to particular publishing houses. But it is a fact that translators now get their names on the covers of books (in English), and that wasn’t true 25 years ago; and they do now nearly always get a royalty as well as a fee. So I think things have improved objectively.

What words of wisdom can you share with translators that you wish someone would have shared with you early on in your career?

That there is no substitute for knowledge—finding things out is ALWAYS more fun in the end than just guessing. That there is no right translation of anything—you have to take responsibility for what you write as a translator just as you take responsibility for what you write as an author. But most of all I wish I had been given more confidence in the belief that translating is a respectable, valuable, creative and worthwhile use of a human brain.

Can you imagine a trend where the popularity of e-books affects how readers access translated content? (For example, through an interactive element that allows them to select alternate translations for words based on their own likes or standards.)

I’ve not thought about that. My first reaction is one of skepticism. But I’m an old fogey, really. Assuming that readers might want such a device (and that’s a big if) I suppose it might be feasible. But I’m not sure how much confusion of the reader is desirable.

What are your predictions for the next decade on what we can expect from the translation industry?

I expect the industry to grow; I expect standards will rise; and I expect non-native users of English as target (L2 translators) will get smarter about having their work checked by L1 English speakers. I also expect a lot more people in the world will learn one of its dozen or so major vehicular languages. But I do not have a crystal ball. Anything can happen!

Thanks again for sharing your expertise with us David! Congratulations on your recently published book and we’re excited about what’s in store for us all next.