An inside look at video game localization (part II)

This is the second of a two-part post (Part 1) written by Thaís Castanheira, a Gengo Senior Translator in the English to Brazilian Portuguese language pair. Learn more about Thaís by checking out her translation website.

With the huge amount of games being released daily and the fierce competition for the next big hit increasing rapidly, the localization process is in many cases, unfortunately, becoming more about speed and output and less about quality and consistency. In many instances, translators simply don’t have enough time to study the game, play the game and perform Quality Assurance on the game once it goes live. In fact, in my opinion, it’s becoming very rare to see a producer that actually takes all of this into consideration when planning the localization project schedule.
Conversely, there are still some very successful cases of localization out there as well. So, how about we focus on the successful cases and use them as our benchmark? And if you’re a game producer considering going global with your game, here’s a few tips I can share with you: 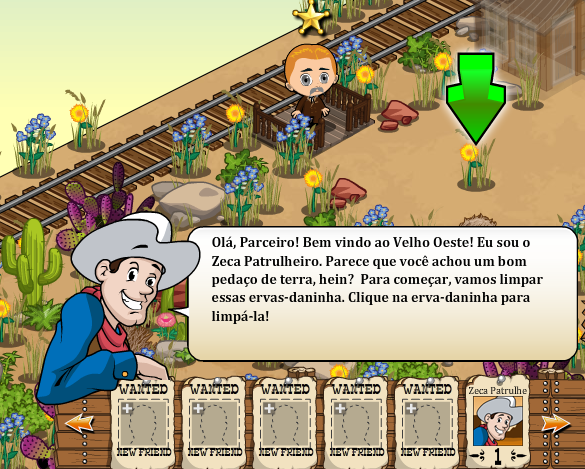 Not too long ago, I was lucky enough to be part of the localization team for a Facebook game called Wild West Town. The game was created by a company by the name of Clipwire, and they did a fantastic job too. Why? Well, partly because they hired an in-house Project Manager (PM) to simultaneously manage all aspects of the localization process.

In a simple example, one scenario where the PM will jump in to help localizers remain efficient might be when a word that has many different meanings needs quick clarification. For instance, take the word “home” and on its own without any context it can mean one’s residence, the first page of a website or the start of a game. Because localizers can’t take any chances with words like this, they depend on the PM to guide them through their translations.

Also, by being there during the localization process, the PM can ensure that translations are correct the first time so that the entire team isn’t wasting time fixing minor errors after the localization is complete. Good characteristics of a PM include someone who can:

Like I mentioned above, it’s always best that game localizers actually play the game. Still using Clipwire as a good example, this company provided all its translators everything they needed to play the game thus making it easier and faster for them to complete missions and clear levels. Trust me, there’s nothing like having an unlimited supply of game money, supplies, XP points and energy when playing a game. 😉

The more time a game localizer has to spend with the game, the better suited they are when it comes time to using their creative insights for completing the localization process. It is this personal experience with the game, as opposed to knowledge or techniques (although these are also important), that really makes a huge difference in the end. Translators who play the games before localizing them have a chance to:

If you don’t already know how much designers like to change their work once it’s finished, the answer is not at all! In the world of game localization, however,  the words “not at all” just don’t exist. The reason is simple. Every new language a game is localized into means the game must be tweaked and adjusted so that it meets the standards required by its new audience. This is why you want to treat designers nicely—give them lots of caffeine, candy and everything else they need to keep happy.

Here is a quick example for you. When the original version of a game (let’s say it’s a US English version) is created, the writers, developers, artists and everyone else on the team has a responsibility to create an environment that works for a US-based English speaking gamer—and that’s only one language. A designer could very well have to change the same image ten times for a game that’s localized into ten languages. Here are some examples of what designers have to keep an eye out for:

In short, a lot can change quickly in the midst of the localization process. And this is why it’s important to build in some flexibility so that changes to design and language can be made as needed. Above all else, keeping peace within the team is key. Of course, finding the perfect blend of patience and creativity is sometimes easier said than done.

Quality Assurance is a very important step if you’re a game developer trying to create a successful game. This is particularly crucial if your game is one that’s played online through social media platforms like Facebook. The reason is because there are tons of social games out there to be played, which means the odds of someone choosing to play a poorly translated game when they can play one that’s been localized well isn’t likely. Not to mention, because social games are usually geared towards the more casual player (as opposed to the serious gamer), they have to be localized well to keep players engaged and coming back for more. Although there is a long laundry list of different areas that need to be checked and re-checked by the localization team, some of the important ones not to be left off the list include:

The localization industry is waiting on you

And there you have it! Whether you’re a game developer thinking about sharing your precious game with the world, a translator passionate about gaming or someone who just wants to learn more about what the exciting world of video localization has to offer, I encourage you to go for it! If there is one thing I know about my job, it’s that there’s something very liberating about being a video game translator. Not to mention, when you’re translating content for a non-existing world it’s always an adventure as you never know what to expect next. Besides, what could possibly be better than getting paid to play games at work? 😉